The Youth Hero for April 2019 is Elliot! Elliot was nominated by Bill Herman of the Dyslexia Institute of Indiana, who said: 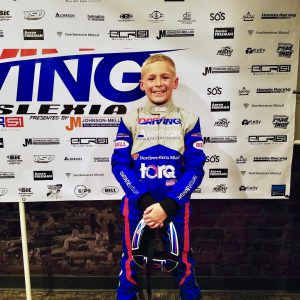 “Elliot has taken his Dyslexia and made it into a superpower. He freely talks about having Dyslexia and is not embarrassed to talk about his Dyslexia. He is not afraid to ask for help when he needs it. Elliot is a proud Dyslexia Institute of Indiana alumni and an honor roll student. Elliot is a seven-time Points Champion and National Champion go-kart racer who travels the world competing, and dreams of becoming the youngest Indy 500 winner. Elliot attributes his Dyslexia to his success. When he isn’t racing or going to school, Elliot gives his free time speaking in schools and with groups of kids to raise awareness about Dyslexia. Elliot was able to address the entire Indiana House of Representative in 2018, where he told them all that he was Dyslexic, and he hoped that they all would vote to pass the Dyslexia Bill that later passed with 100% support. Also, Elliot started the fundraising campaign, Driving for Dyslexia, to help raise scholarship money for Dyslexia Institute of Indiana. Elliot’s first Driving for Dyslexia event helped raise over $18,000 for children with Dyslexia.”

When Elliot found out he had won, he said: “I’m really honored to be named a Youth Hero. Thank you so much for the award. I work hard to help kids with Dyslexia, because I know how it feels to have it, and I don’t want kids to feel like they aren’t smart because they have Dyslexia. Dyslexia doesn’t stop me; don’t let it stop you!”

One Reply to “Youth Hero: Elliot”

For information about trainings or Learning Network details, please contact Becky Reich, MCCOY’s Director of Training, at 317-921-1266 ext. 102 or at [email protected]

Board members will find resources, reminders and announcements by logging into the Board Member Portal   Login   ☛

If you shop at Kroger, help MCCOY earn Community Rewards with your Plus Card! Sign up here. • Organization Name: MCCOY, INC. • Organization Number: HY225 If you are interested in using donor-advised funds, please contact John Brandon at [email protected]