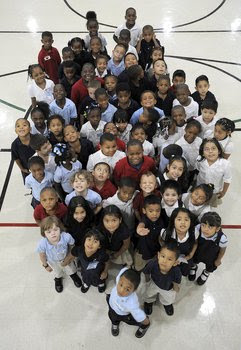 Once again, the Indianapolis Star’s Our Children, Our City series is shedding light on challenges facing our young people. Below is an excerpt from Robert King’s most recent article for the series. Read the full article: Challenges clear for School 61 kindergartners.

“This vast gulf of readiness for kindergarten was evident in children seated right next to each other in the same class.

SeNyah Bolden, a 5-year-old who showed up with an entourage — her mom, grandma, grandpa, aunt and assorted siblings and cousins — smiles readily and responds to her teacher’s questions. In a congested room, she offers a pleasant “excuse me” to an adult in her path. She is glad to be here. She is a teacher’s dream.

Next to her is a boy who showed up on the first day without anyone. He gave his name to the librarian and the principal, but his teacher could glean only a first initial and his last name. For the first three days, that’s how he was known. He started making a name for himself in other ways.

On his first trip to the library, he wandered to the back of the room and started spinning in a chair. Unresponsive to the librarian, he earned a trip to the principal’s office — two hours into his school career.

It wouldn’t be his last. By the end of his first week, the boy called a lunchroom worker a name that included the F-word and was reported by a bus driver for dangerously waving sticks around other kids at the bus stop.

Two children, as different as night and day, taking their first steps across life’s tender little starting line. Though, clearly, not starting from the same place.”