Skip to content
Jane Addams, Nobel Peace Prize winner and widely accepted to be the founder of social work in the United States, was also one of the most influential advocates for children in our nation’s history. 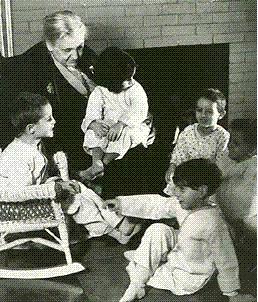 Cate, a 3rd-grader, tells us the story of Jane Addams and the Hull House:
Addams is best known for founding the Hull House in Chicago in 1889, which provided a variety of support and services to the local marginalized immigrant population.  She lived and worked there until her death in 1935.
While the Hull House served everyone in the neighborhood, many of the efforts were quite specific to children.  The Hull House provided day care and kindergarten services for working parents.  However, this was no ordinary childcare environment.  The children of Hull House had access to art, a library, and plenty of freedom to exercise and just play – very unusual luxuries for most children born into these poor and struggling immigrant families.  In fact, children during this time were often expected to work long hours in deplorable conditions alongside their parents.
The pervasiveness of child labor was deeply upsetting to Addams.  She was a very active in lobbying for policy that would end child labor, which was finally enacted on the federal level in 1916.  Additionally, she helped to create the first juvenile court.  She was vice-president of the Campfire Girls, and a member of the executive boards of the National Playground Association and the National Child Labor Committee.
Today, thanks to the trailblazers of the past, there are countless ways to serve and advocate for young people in our community.  From mentoring, to supporting legislation that would lead to positive youth outcomes, to donating time and money to youth advocacy organizations, we all have the power to be champions for our youth.
What will you do?